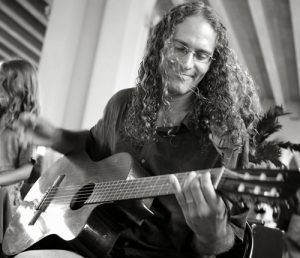 When we book Dennis Fermin in the farmers market, we are setting the mood with beautiful and uplifting music he plays on the Spanish guitar.

“Passion and Romance from Spain to the Caribbean Islands”. Hailing from the roots of Puerto Rico and the Dominican Republic and even further to Spain, Fermin was just a child when he began playing instruments and performing at large family gatherings. Coming from a very musical family it wasn’t that hard for him to follow his chosen path that now has touched the hearts and lives of many from the U.S. to the Spanish Caribbean Islands.

Dennis Fermin was born and raised in the state of N.Y. He was first introduced to the music world by his parents. His father would play Spanish guitar and sang along with his mother while Dennis played percussion instruments with them at late night family parties at a very early age.

He has performed at some great events such as Centennial Park’s 4th of July Celebration, Festival of Trees at Georgia’s World Congress Center, Music on Broad, Canton Festival of the Arts, and Taste of Kennesaw, just to name a few.

Due to the Corona Virus, the farmers market is temporarily located at the corner of 14th and Lime Streets.