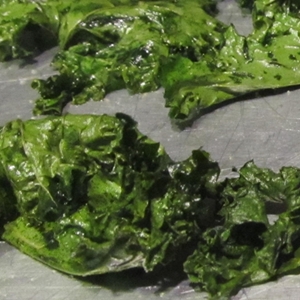 Managing a Farmer’s Market can get very expensive because I want to try EVERYTHING! It only took a few weeks to realize that I needed a plan each Saturday morning or else I was going to go broke. This week I was on a mission to learn the best way to make Kale Chips.

Kale Chips have been all the rage and many have said they satisfy any craving for something salty and crunchy without the guilt associated with a sitting down to a bag of Ruffles. So, I called my mother to write down the recipe she has been bragging about.

I like greens. I always have, so it was no surprise to my family when I announced my newest recipe in our never ending attempt to eat a little healthier. Though I didn’t quite understand how these thin little wisps of rabbit food would turn into a crispy, crunchy chip, after all, the only way I had ever cooked kale before was like any other green: boil the Hell out of it!

My mother is not known for her fabulous cooking, so when I phoned her for the recipe, I made sure she was sitting down first, a conversation starter that used to end with, “I’m pregnant again.”

I could nearly hear her tears of joy as she excitedly let me in on “her little secret” about preparing the chips. “If you cook them too long, they will turn to dust.” Yes, that was the type of cooking I grew to expect from my mother, so of course we Googled a couple other recipes to try… just in case.

The conversation had spread to our Facebook page and now my entire family was interested in baking the kale. My husband ran to the store for sea salt, while my daughter thoroughly washed and dried the greens.

Directions:
Preheat the oven to 275 degrees F.
Remove the stems and large veins from the kale and tear into chip sized pieces.
Toss with the olive oil and salt, and then spread them on a baking sheet.
Bake for ten minutes, turn them over, and bake for ten more minutes.

The recipe was simple enough, so we pre-heated the oven and set to work. 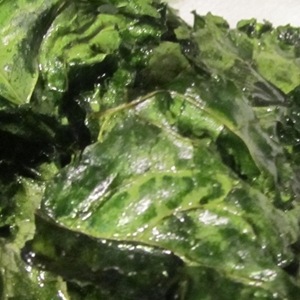 Now, my mother often blamed the oven for her kitchen mishaps, so I learned long ago to have the Kenmore man check my kitchen range before the holiday cooking season began. I knew my oven was cooking properly; Sears had just made their service call on Friday, the day before the Market.

The first batch was timed perfectly, but they turned to dust. The chips were edible, but not what we were expecting so we prepared a fresh cookie sheet and started over. This time we put the oil and salt on the tray first, then tossed the kale and baked as directed. Again, they were edible, but nothing to phone home about.

We turned to another recipe:

Directions:
Preheat an oven to 350 degrees F.
Line a non insulated cookie sheet with parchment paper.
With a knife or kitchen shears carefully remove the leaves from the thick stems and tear into bite size pieces.
Wash and thoroughly dry kale with a salad spinner.
Drizzle kale with olive oil and sprinkle with seasoning salt.
Bake until the edges brown but are not burnt, 10 to 15 minutes.

They tasted pretty much the same as the original ones we had baked. They were edible, the salt and oil even made them tasty… or it could have been because we had been cooking for nearly two hours and let me tell you, “Kale chips are not a stick-to-your-ribs type of snack.”

We expected fireworks! A healthy dish we could take to our next tailgate party that would be adored by our beer guzzling buddies. So far, this was not going to happen.

We held a completed discussion about the Kale Chips:
“Would we serve these at a party?”
“Where they worth the money, time and effort?”
“Should we make them again?”

The consensus was, we all liked the chips, but we did not LOVE the chips, and for the effort to make them, “No, we would not serve them at a party, they were not worth the money, time or effort, and no, we would not be making them again… unless.”

My husband always has an “unless” when it comes to the kitchen. If you know us, then you learned quickly that he prepares the majority of our meals. A practice that started a long time ago in our home, mostly because he loves to use the outdoor grill.

Anyway, he continued, “Unless, we try the recipe Denise gave us from Twinn Bridges Farm.”

Each week my husband buys something he cannot identify from one of the farmers at the market and then asks them how to cook it. My husband also loves to talk, so when he told Denise that we were going to make Kale Chips, she gave him her recipe.

Directions
Spray Pam on a microwave safe plate.
Arrange the clean and dry pieces of kale on the plate.
Spray the kale with Pam.
Sprinkle with sea salt to taste.
Cook on high for four (4) minutes.

After spending nearly the entire day baking Kale Chips, it turns out the microwave recipe was the best of all.

They still had the crispness we desired, they did not dissolve in your mouth and the cooking spray probably shaved off a few calories as well.

Maybe next time, we will try making them in the dehydrator for comparison. Until then, I am off to make Romaine Salad. This will be sprinkled with Romano Cheese and fresh pecans, drizzled with a cranberry vinaigrette then set under the broiler for a few minutes. If you hear fire trucks in my neighborhood, we’ll be fine; it just means my mother is helping me cook. 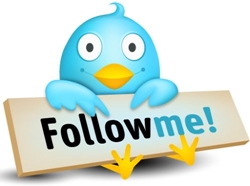